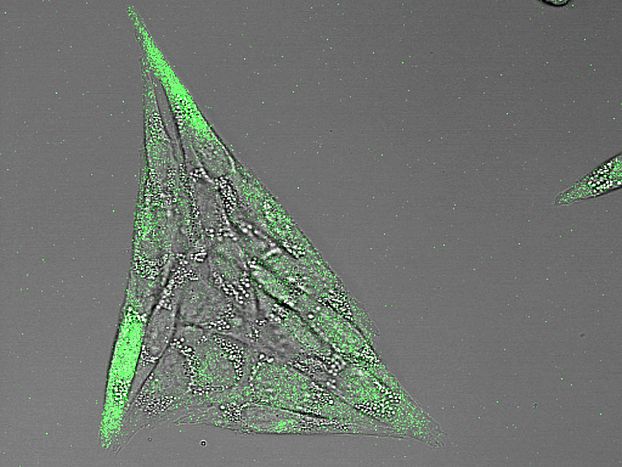 Enzyme-loaded nano-capsules work in tandem. The calcium level in the cells (green fluorescence) serves as an indicator that the system is working. (Microscopic image: University of Basel, Department of Chemistry)

Many diseases are caused by defects in signaling pathways of body cells. In the future, bioactive nanocapsules could become a valuable tool for medicine to control these pathways. Researchers from the University of Basel have taken an important step in this direction: They succeed in having several different nanocapsules work in tandem to amplify a natural signaling cascade and influence cell behavior.

Cells constantly communicate with each other and have ways to pick up signals and process them –  similar to humans who need ears to hear sounds and knowledge of language to process their meaning. Controlling the cell's own signaling pathways is of great interest for medicine in order to treat various diseases.

A research team of the Department of Chemistry at the University of Basel and the NCCR Molecular Systems Engineering  develops bioactive materials that could be suitable for this purpose. To achieve this, the researchers led by Professor Cornelia Palivan combine nanomaterials with natural molecules and cells.

In the journal “ACS Nano”, they now report how enzyme loaded nano-capsules can enter cells and be integrated into their native signaling processes. By functionally coupling several nano-capsules, they are able to amplify a natural signaling pathway.

In order to protect the enzymes from degradation in a cellular environment the research team loaded them into polymeric small capsules. Molecules can enter the compartment through biological pores specifically inserted in its synthetic wall and react with the enzymes inside.

The researchers conducted experiments with nano-capsules harboring different enzymes that worked in tandem: the product of the first enzymatic reaction entered a second capsule and started the second reaction inside. These nano-capsuled could stay operative for days and actively participated in natural reactions in mammalian cells.

One of the many signals that cells receive and process is nitric oxide (NO). It is a well-studied cellular mechanism since defects in the NO signaling pathway are involved in the emergence of cardiovascular diseases, but also in muscular and retinal dystrophies. The pathway encompasses the production of NO by an enzyme family called nitric oxide synthases (NOS). The NO can then diffuse to other cells where it is sensed by another enzyme named soluble guanylate cyclase (sGC). The activation of sGC starts a cascade reaction, regulating a plethora of different processes such as smooth muscle relaxation and the processing of light by sensory cells, among others.

The researchers lead by Palivan produced capsules harboring NOS and sGC, which are naturally present in cells, but at much lower concentrations: the NOS-capsules, producing NO, act similarly to loudspeakers, “shouting” their signal loud and clear; the sGC-capsules, act as “ears”, sensing and processing the signal to amplify the response.

Using the intracellular concentration of calcium, which depends on the action of sGC, as an indicator, the scientists showed that the combination of both NOS and sGC loaded capsules makes the cells much more reactive, with an 8-fold increase in the intracellular calcium level.

“It’s a new strategy to stimulate such changes in cellular physiology by combining nanoscience with biomolecules”, comments Dr. Andrea Belluati, the first author of the study. “We just had to incubate our enzyme-loaded capsules with the cells, and they were ready to act at a moment’s notice”.

“This proof of concept is an important step in the field of enzyme replacement therapy for diseases where biochemical pathways malfunction, such as cardiovascular diseases or several dystrophies”, adds Cornelia Palivan.